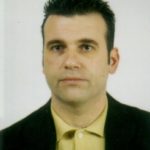 Dr. Dimitris Davazoglou was born at Heraklion, Crete in 1960. He received a degree in Physics from the University of Thessaloniki in 1983 and his M. Sc. and Ph. D. from the University of Montpellier, France, in 1984 and 1987 respectively. Within the period 1990-2013 he was with the Institute of Microelectronics and currently serves as Research Director at the Institute of Nanoscienec and Nanotechnology of the NCSR “Demokritos”. His research focuses on the area of the CVD and ALD of dielectric and metallic films and the fabrication and packaging of opto-electronic devices (Si and organic solar cells, electrochromic displays and organic LEDs) and gas sensors. Dr. Davazoglou has published more than 100 scientific and technical papers in international journals, which have received more than 1000 citations corresponding to an h factor of 20. He has participated and co-ordinated numerous national and international research projects and has organized or co-organized National and International Conferences on CVD and Solar Cells. He is member of the editorial board of the Journal “Chemical Vapor Deposition” and serves as national representative at the board of EUROCVD.