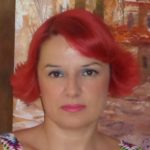 Dr. Maria Vasilopoulou received her degree in Physics from the University of Athens in 1995 and her PhD degree from the Chemical Engineering Department of the National Technical University of Athens in 2002. From 2002 until 2006 she worked, as a postdoctoral researcher, at the Institute of Microelectronics in the National Center for Scientific Research (NCSR) “Demokritos”, where she remains as scientific personnel. Between 2001 and 2012 she has also worked as an adjunct assistant professor in the Departments of Electronics in the TEI of Piraeus. Her research activity focuses on the area of the organic optoelectronic devices and mainly on organic/organic and organic/inorganic interfaces characterization. Also, her scientific interests include physicochemical characterization of polymeric materials for micropatterning applications. She has published more than 75 scientific papers in international journals and conference proceedings and holds five patents.